A smartwatch powered with Arduino, and a revision our previous Watchduino project. 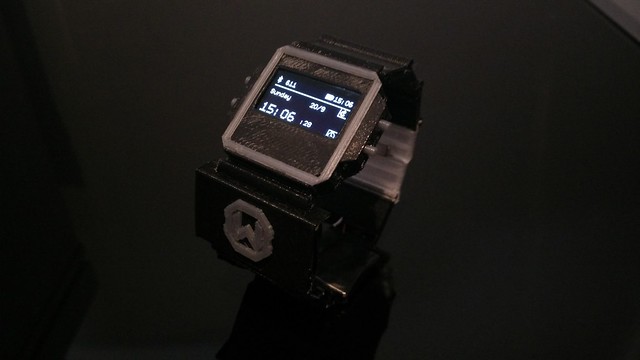 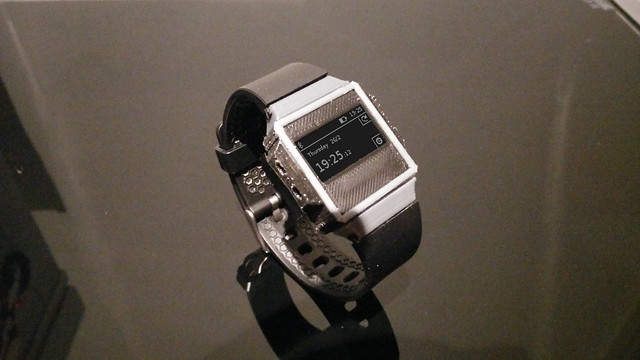 The Watchduino project started as an attempt to build a smartwatch at the reach of everyone: inexpensive and open. So that anyone can afford one, or even build it from scratch. And at the same time, so that anyone can built their custom applications for it.

The first version of Watchduino was a very simple standalone device that featured time, alarms, and a couple of games. You could say that it was really more like a traditional “dumbwatch”, except for the fact that the system was prepared to allow for custom user-programmed apps to be plugged in. On top of that, the total cost of the components to build one was around $10, and the battery life span was of months.

Since then, we’ve been working on version 2, which we intend to be as fully featured as a regular commercial smartwatch. By including a BLE into the watch, we are able to pair the device with an Android phone, and send and make notifications flow between the two. It is still a work in progress, but we already have a prototype with some of the functionality, that we are ready to show the world. 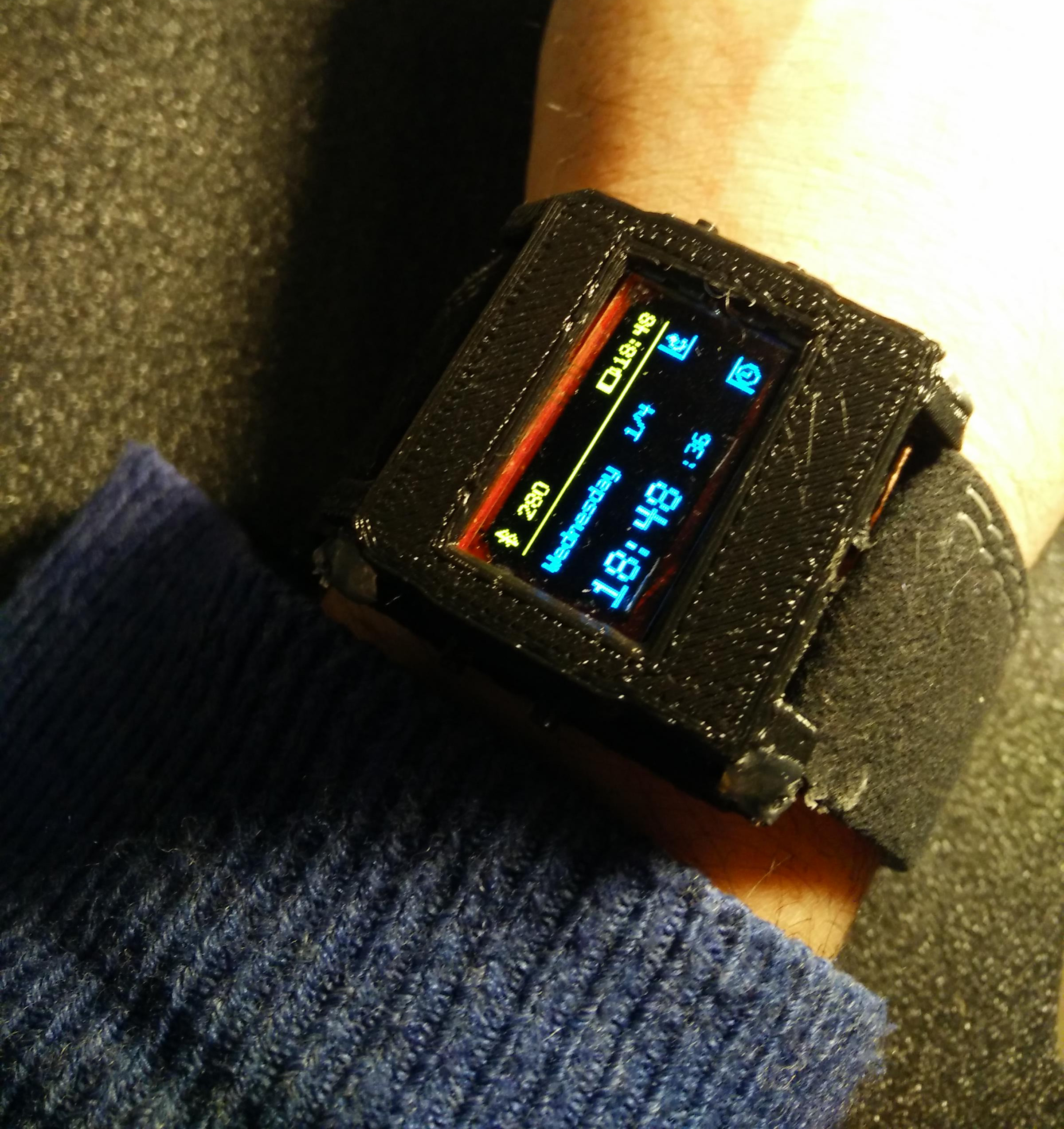 Apart from that, there is an Android app for comunication which provides cool features like a a Twitter client for our smartwatch.

We changed most of the hardware from the first version, mostly with the aim of trying to make the watch smaller. The current bill of materials is: 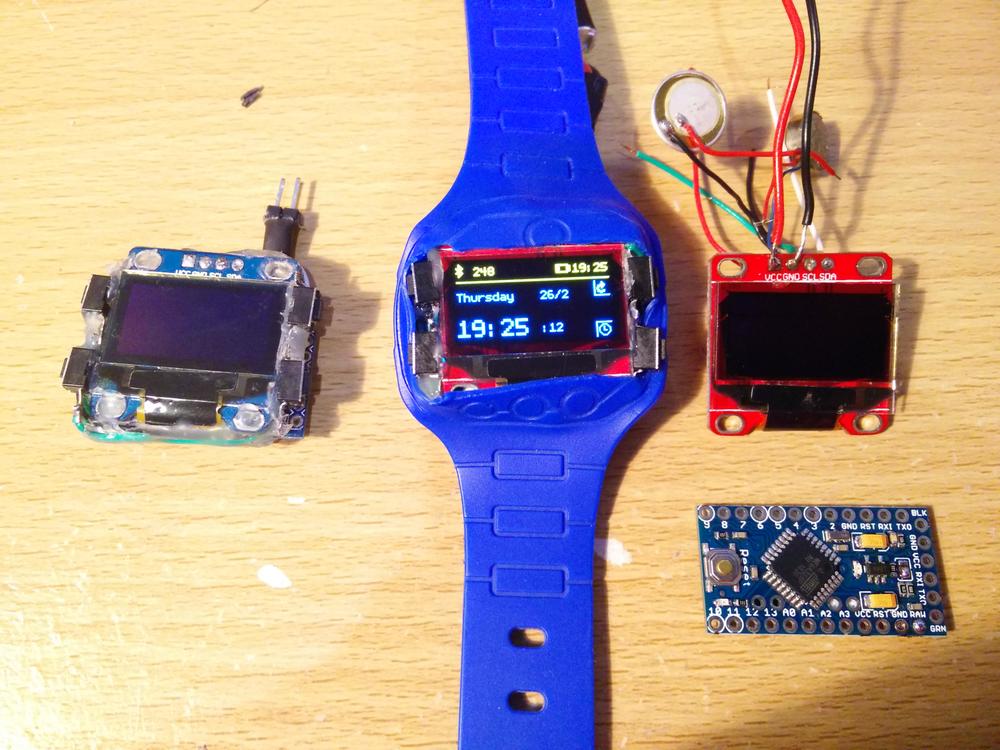 As mentioned, Watchduino 2 is still a work in progress, but nevertheless, there are some features that we already have working in our prototype.

Notifications from the phone

The best feature in Watchduino is the capability of sending notifications from your Android phone (just like all the proper smartwatches do). By using the Notification Listener Service we can redirect any notification to the watch via Bluetooth automagically (SMS, Emails, Whatsapp, Facebook, Google Now, calendars, etc). Then, once the notification arrives to the watch, you can just press a button to dismiss that notification in your phone too. 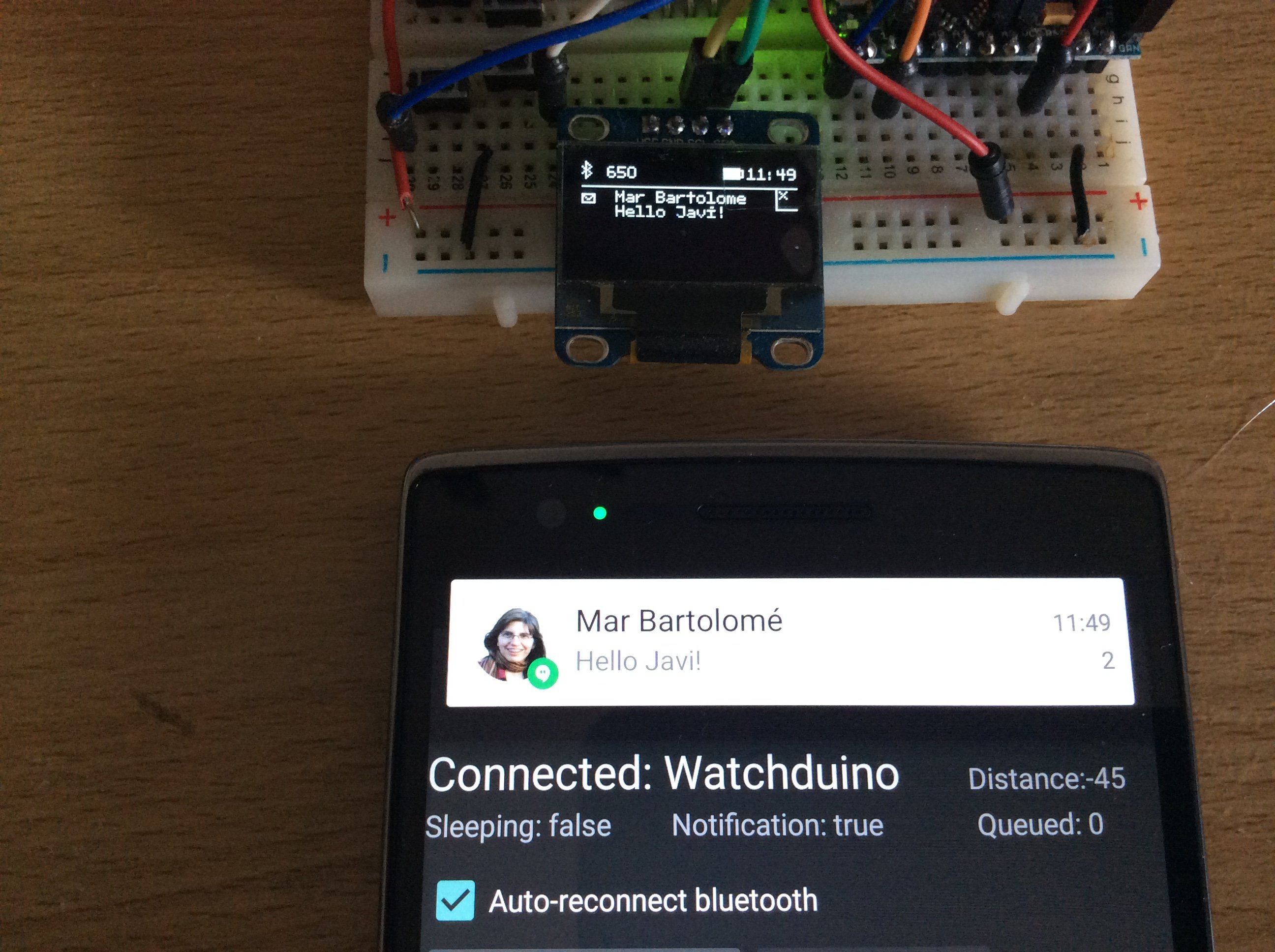 The main improvement over the previous version is the BLE component, that allows it communicate with an Android phone. This is incredibly powerful, as effectively makes the phone become a “second brain” which is connected to the Internet, and can provide the watch with many useful data that was previously out of it’s reach.

Thanks to the bluetooth pairing, we were able to build the following applications in the watch:

The trick is that all of these apps also require an Android component in the Watchduino Android companion app, doing all the heavy lifting and simply passing Watchduino the results to display, via Bluetooth. 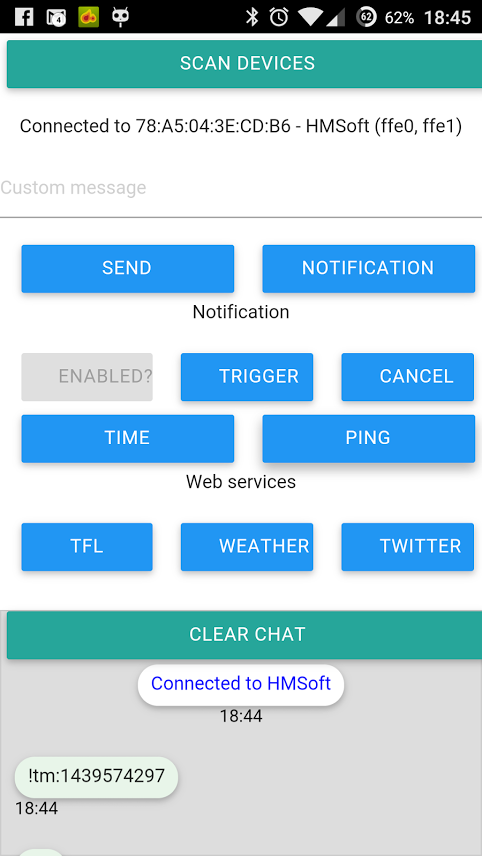 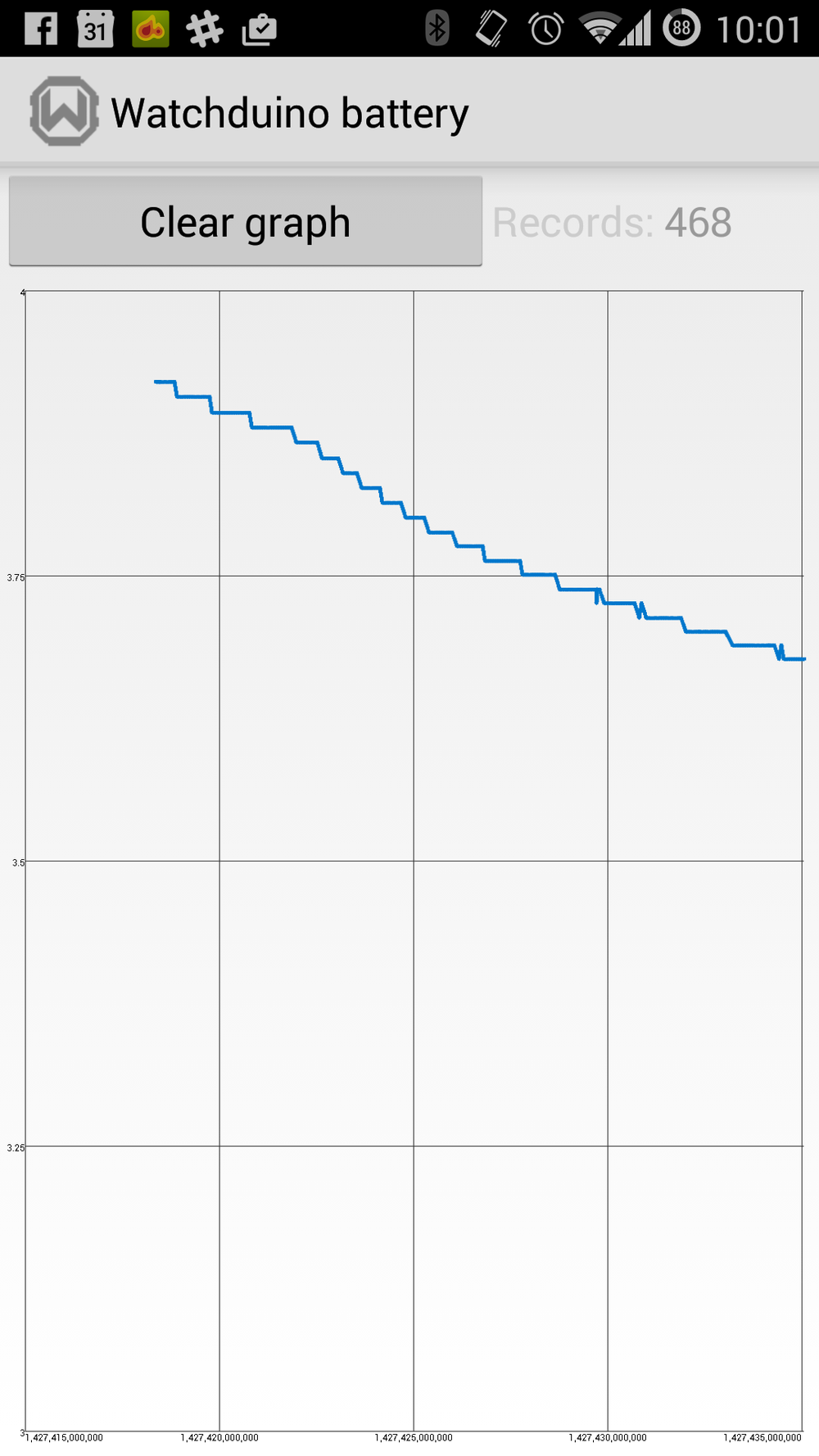 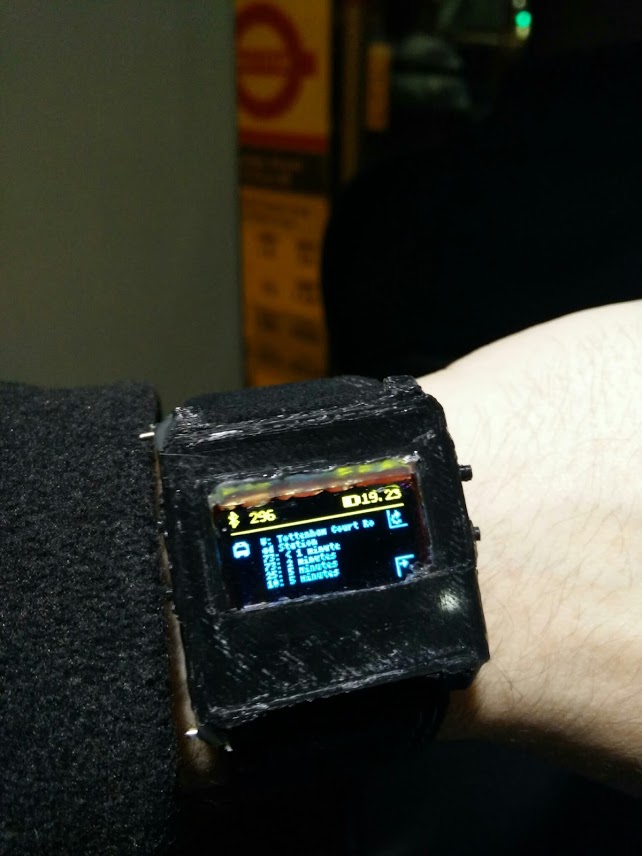 Since we are using a different screen, with a better resolution (128x64), we were able to build a more flexible UI.

The top of the screen is showing a status bar, similar to what smartphones do. The 4 corners of the screen show contextual symbols that indicate what the purpose of the buttons is in every occasion. For instance, in the main menu you can move left and right, enter or exit. 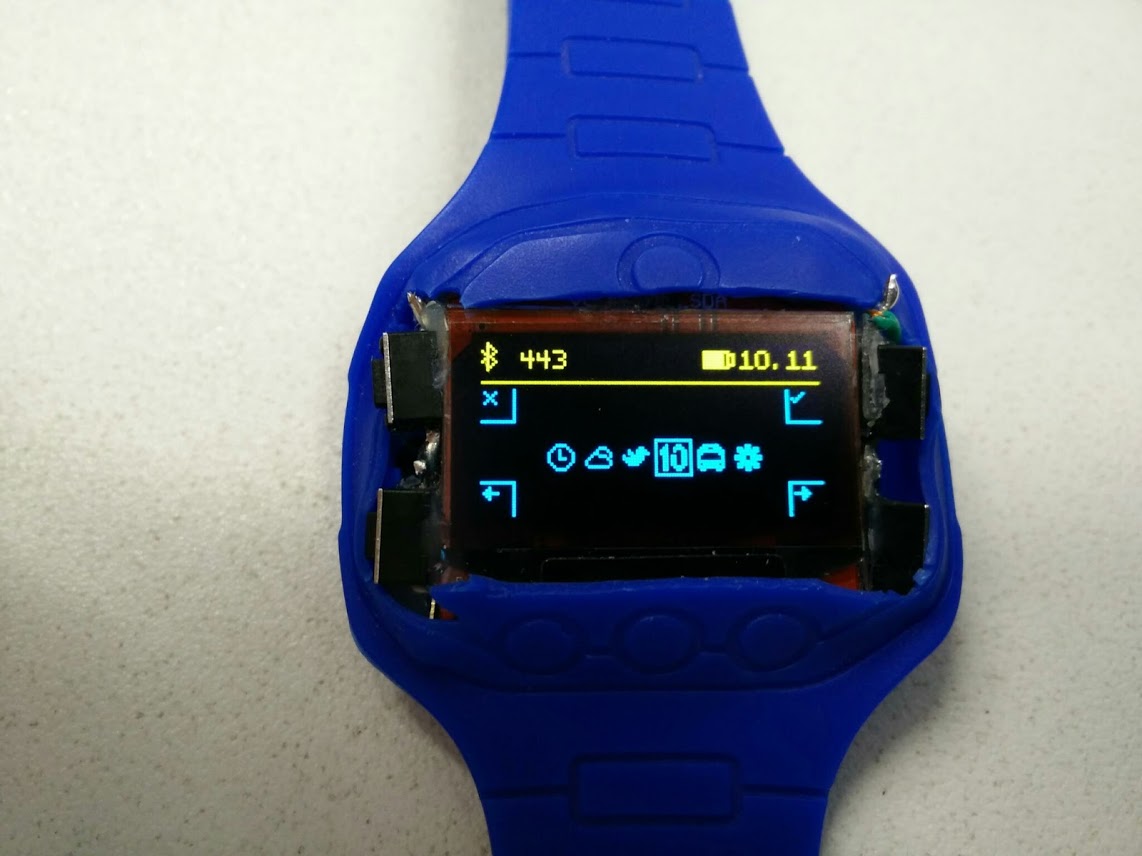 On an app, the functionality of the buttons can change. For instance, on the Twitter app you can request a reload, or navigate between tweets. 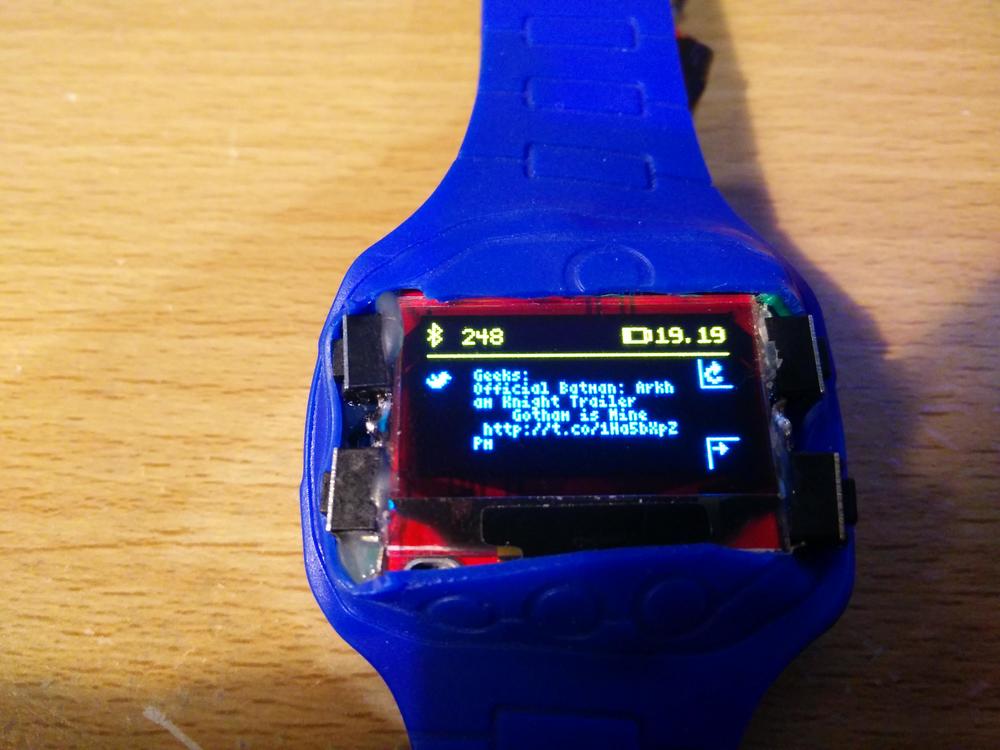 Can I see it in action?

Sure, here’s a video showcasing the communication capabilities in the latest prototype:

The video shows both the watch and the android companion app (the new sexy Cordova redesign) working together. We first pair the application and then trigger some notifications both from the watch (when we enter the weather app for instance), or from the phone (using the testing buttons in the companion app to simulate a notification).

Turn on the subtitles for further explanations of what’s going on at each point.

There is still plenty to do! We have a working prototype with some cool apps, but there’s much polishing until we can reach a product that actually usefull and nice to use in your everyday life: